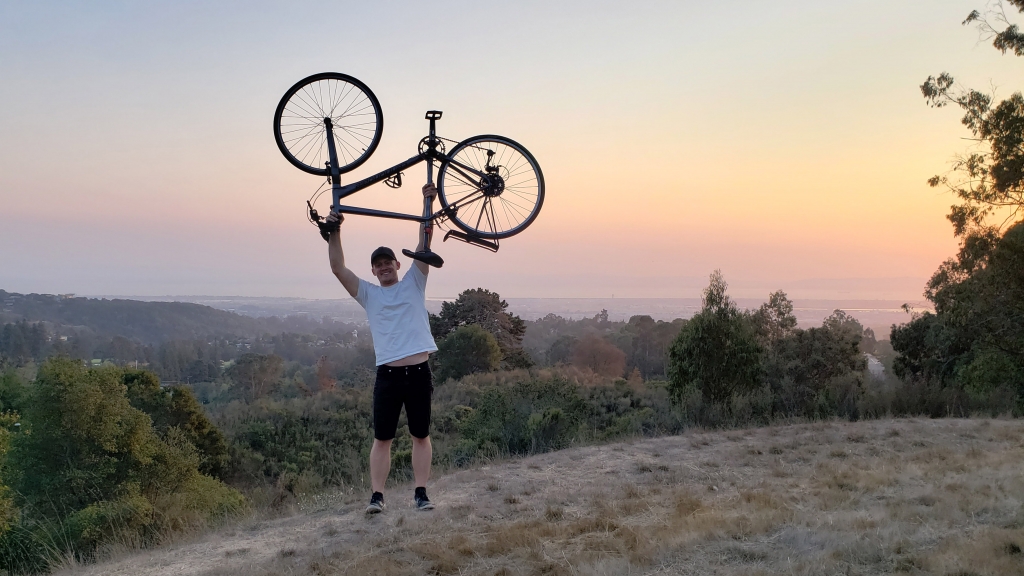 Prior to mid-March I had spent the six years I lived in Oakland either playing competitive team sports, going to the gym, or doing some other group outdoor athletic activity. With the shelter-in-place order, everything I knew was taken away.

I responded by doing the only thing I could: ride my bike. I had been a daily biker in Oakland since I moved here, but I rarely left my comfort zone: most of my social life was located between North Oakland, West Oakland, Downtown, and Lake Merrit.

One day in early April, I started criss-crossing the streets of the Lower Bottoms where I lived, intently observing each house, car, and yard sign. Suddenly, I got an idea: what if I did this for every neighborhood? It would allow me to not only take a closer look at places I zipped by every day, but explore new neighborhoods I had never been to.

One day turned into a week, and before I knew it, I had a routine down. I would start every day after work, choosing a different neighborhood and meticulously biking up and down every street. Along the way, I tried my best to spread joy to Oaklanders. I waved at every single person I saw, complimented people on their yards, houses, and cars, and I was rewarded with many stimulating conversations with all types of Oakland residents.

To track my progress, I used a modified version of Gene Anderson’s Oakland Neighborhoods Map, marking each neighborhood off by removing its custom color as I completed it. For on-street progress tracking, I used an app called OysterX, which turned every foot of every street I biked from dark to light.

I took a bunch of photos. Here’s an Imgur album with my favorites:

Depending on who you ask, Oakland has has somewhere between 140 and 160 individual neighborhoods. I made some very, very subjective superlatives:

Redwood Heights residents take their yards seriously. Plants, gardens, and beautifully-arranged succulents made this neighborhood a pleasure to bike around in.

Some Oakland neighborhoods are fairly segregated, but Patten and some of the other neighborhoods between Fruitvale and the Dimond have a beautiful mix of people living side-by-side.

Potholes and bad road quality have been a hot-button political issue in Oakland the past few years, and every neighborhoods thinks theirs are the worst. I’m pretty sure residents of Oak Tree, which is nestled between Fruitvale and San Antonio, have the most right to complain.

Millsmont, with its single-level 1970s homes, hilly terrain, and ample tree cover, feels more like a Western Pennsylvania suburb than anything in Oakland.

A quaint neighborhood of single-family homes in the middle of East Oakland.

Leona Heights is tucked in right below a giant park that used to be home to a sulfur mine. A bunch of narrow streets hidden by huge trees and a sparse population give residents a ton of privacy.

If you like McMansions, you’ll love Caballo Hills! Also, apparently people actually have gates with the first letter of their last name on them — it’s not just a villain trope from a superhero movie.

This is in Oakland? award – Panoramic Hill

Tucked behind the Cal football stadium, Panoramic Hill has all the markings of a Berkeley neighborhood, but most of it actually lies within Oakland city limits!

Thank you to Sean Justice from the City of Oakland for pulling street statistics for this article, to the editors of the Oakland Wiki for neighborhood information, and to every Oaklander I met along the way.
Share
4Comments